In Ubuntu the “extension” to a file name, that is, the part after the dot (.) is normally visible. Why is Nautilus not showing the extension of eclipse.desktop when the ls command clearly shows that is the full file name?

This is the list view; not the icon view. 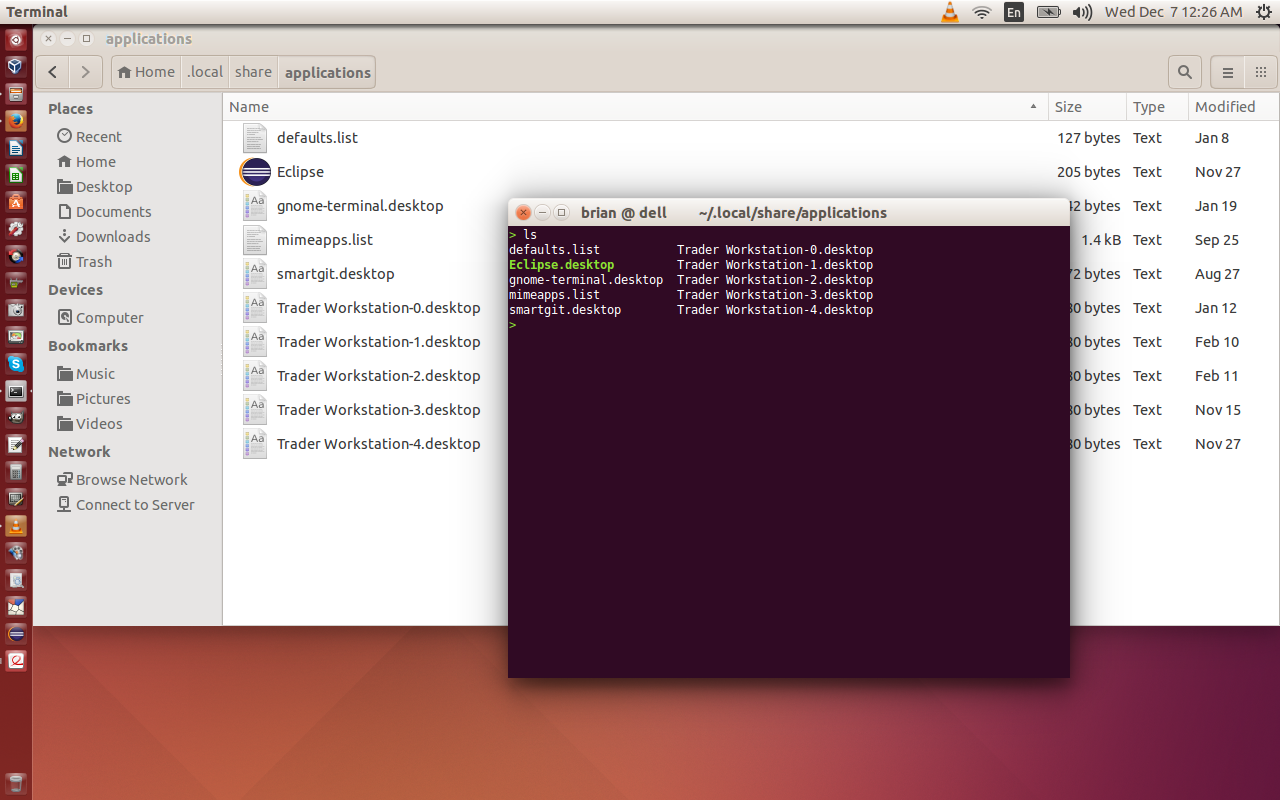 What is a valid .desktop file under user’s home directory?

According to Ubuntu’s security policy the execution permission in .desktops files and shells script is a must to run executable code from those files when they are located in a user’s home directory.

Nautilus will not consider a .desktop file as valid application shortcuts unless it has executable bit when they are located in a user’s home directory.

On the other hand it is hard coded in nautilus’s source code that it will show a valid .desktop file’s name from the Name= or Name[$LANG] field inside the .desktop file ignoring the filename and extension. This does not apply to .sh or .jar files in nautilus.

Example: On a fresh Ubuntu installation every user gets examples.desktop in their home directory. The file name is examples.desktop. But in nautilus one can see it as Examples. If you look inside the .desktop file you can see following (I am showing only part of it):

You can check the permission (try ls -la /path/to/filename.extension) of Eclipse.desktop and smartgit.desktop. The former has executable bit set whereas the later has not.

That is why nautilus is recognizing Eclipse.desktop as application shortcuts and not showing its extension.

About .desktop files and their special function

.desktop files are special files. They represent applications in the GUI, either on your desktop or in Dash/Unity. To do so, a GUI -name of the application is set in a line inside the file in the line

If the .desktop file is on your desktop however, if it is not executable, it does not work as a launcher, for reasons explained in souravac’s answer, and “shows” under its own (file) name:

If it is executable and on your desktop, it works as a launcher and so it is is representing an application. Then it shows the application’s name, as set in the line Name=

If the .desktop file has the line:

the file even shows a language- specific name, fetched from a language file, which will then show in Dash and Unity.

In the ls command is purely cli- based and always shows the file -name.

If a .desktop file is executable then Nautilus will recognize it as a desktop shortcut and will not display the name of the file, but rather the string set as the value of the Name= property in the file.

At this link author “fragos” writes:

Unfortunately, if you open that folder in nautilus the .desktop files
appears with the icon specified in the file and with the file name
called out within the file.

When he says “file name called out within” he means the displayed file name is taken from within. I would say “file name called out within when the executable bit is set”. He may be right that this is unfortunate. Strangely I have some that have the execute bit set and some that do not. The ones that do NOT have the execute bit set are not a cause of misfortune but I don’t know why I was lucky. When the bit is set perhaps it can be considered a quirk or bug.

What does Ubuntu Core consist of?

Ubuntu 20.04 does not recognize second monitor