What is Unix, Linux, Ubuntu?

Are they the same thing or different versions or completely different stuff?

This has always made me confused, any explanation would be great.

Unix was and is (mostly) proprietary. So some people got their collective noggin together in the 1980s and put together something that reproduced Unix functionality without copying its source code, which would have been illegal [insert longer version about Richard Stallman and Linus Torvalds here].

One of the first GNU/Linux distributions was Debian. Ubuntu was created by people that had been involved with Debian and Ubuntu is officially proud of its Debian roots. It’s all ultimately GNU/Linux but Ubuntu is a flavor. In the same way that you can have different dialects of English. The source is open so anyone can create their own version of it.

However, Debian is not really useable for mere mortals such as myself and that is where something like Ubuntu comes in. Indeed, I understand that it is specifically the strategy of Canonical, the company behind Ubuntu, to target the non-geek user. Which is why most new GNU/Linux users come to Ubuntu or Mint (which is based on Ubuntu) first.

This is from Wikipedia: Linux. Cheating I know….

The Unix operating system was conceived and implemented in 1969 at
AT&T’s Bell Laboratories in the United States by Ken Thompson, Dennis
Ritchie, Douglas McIlroy, and Joe Ossanna. It was first released in
1971 and was initially entirely written in assembly language, a common
practice at the time. Later, in a key pioneering approach in 1973,
Unix was re-written in the programming language C by Dennis Ritchie
(with exceptions to the kernel and I/O). The availability of an
operating system written in a high-level language allowed easier
portability to different computer platforms. With a legal glitch
forcing AT&T to license the operating system’s source code to anyone
who asked,[22] Unix quickly grew and became widely adopted by academic
institutions and businesses. In 1984, AT&T divested itself of Bell
Labs. Free of the legal glitch requiring free licensing, Bell Labs
began selling Unix as a proprietary product.

Linux is a Unix-like computer operating system assembled under the
model of free and open source software development and distribution.
The defining component of Linux is the Linux kernel, an operating
system kernel first released 5 October 1991 by Linus Torvalds. Linux
was originally developed as a free operating system for Intel
x86-based personal computers. It has since been ported to more
computer hardware platforms than any other operating system. It is a
leading operating system on servers and other big iron systems such as
mainframe computers and supercomputers:more than 90% of today’s 500
fastest supercomputers run some variant of Linux,including the 10
fastest. Linux also runs on embedded systems (devices where the
operating system is typically built into the firmware and highly
tailored to the system) such as mobile phones, tablet computers,
network routers, televisions and video game consoles; the Android
system in wide use on mobile devices is built on the Linux kernel.

Ubuntu is a computer operating system based on the Debian Linux
distribution and distributed as free and open source software, using
its own desktop environment. It is named after the Southern African
philosophy of ubuntu (“humanity towards others”). As of 2012,
according to online surveys, Ubuntu is the most popular Linux
distribution on desktop/laptop personal computers, and most Ubuntu
coverage focuses on its use in that market.

Ubuntu is sponsored by the UK-based company Canonical Ltd., owned by
South African entrepreneur Mark Shuttleworth. Canonical generates
revenue by selling technical support and services related to Ubuntu,
while the operating system itself is entirely free of charge.

(I had added the overview-poster to the related question half-jokingliy; But here, it is actually helpful in relation to the other answers:)

There is also a somewhat more detailed poster that I vaguely remember, but for a quick summary, that should be enough: 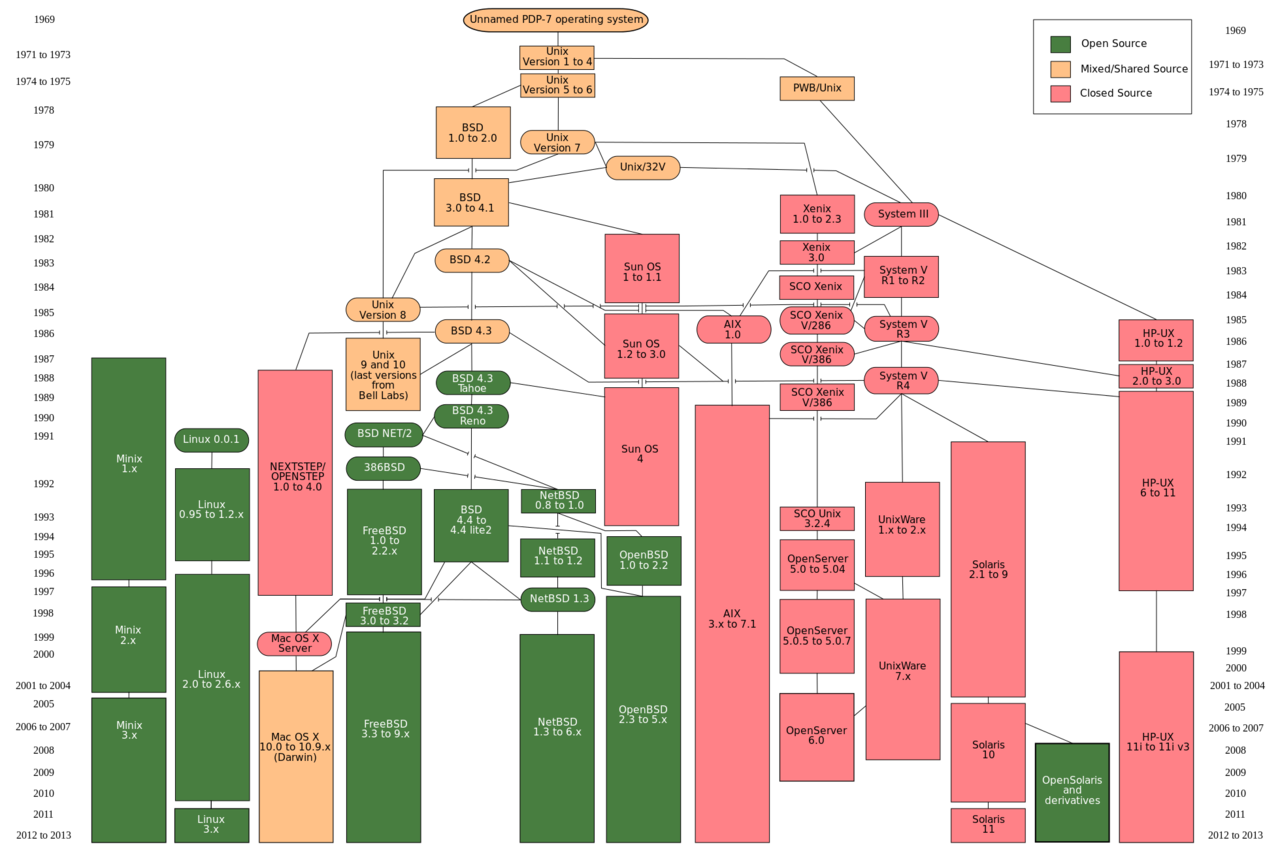 (For the details (all), see GNU/Linux Distribution Timeline 12.10 – but that “somewhat more detailed poster” I vaguely remember was somewhere in between…)

Many a times we get confused with Unix and Linux also threat them as
synonyms but that is not true. UNIX is copyrighted name only few of
the companies are allowed it i.e. IBM AIX and Sun Solaris and HP-UX.
This quote from Official Linux kernel README file confuses most.

Linux is a Unix clone written from scratch by Linus Torvalds with
assistance from a loosely-knit team of hackers across the Net. It aims
towards POSIX compliance.

In this article I am trying to describe the various differences between Unix and Linux under the following headings.

UNIX was created in the 1960s by the AT&T Bell Labs (Ken Thompson and
Dennis Ritchie) and first commercially UNIX OS became available in
1970. First release of Unix was having a command line interpreter and some small utility programs with future extension for the multitasking
and UNIX evolved from there.

In 1991, Linus Torvalds began working on a UNIX like OS known as
Minix. The Minix source code was freely available under GNU GPL and he
successfully modified this code for use on x86 PC systems. By
September 1991, Torvalds has successfully completed the first Linux
kernel designed for PCs. This kernel included various system utilities
and libraries from the GNU project to create a usable operating system
based completely on open source code.

Usage The UNIX operating system is used in internet servers, workstations & PCs. Backbone of the majority of finance infastructure
and many 24×365 high availability solutions.

Linux can be installed on a wide variety of computer hardware, ranging
from mobile phones, tablet computers and video game consoles, to
mainframes and supercomputers.

Cost Linux is Free (as it is opensource, except the case where you need a supported version i.e. RHEL). You can download it from the
Internet or redistribute it under GNU licenses. You will see the best
community support for Linux. Most UNIX like operating systems are not
free (but this is changing fast, for example OpenSolaris UNIX).
However, some Linux distributions such as Redhat / Novell provides
additional Linux support, consultancy, bug fixing, and training for
additional fees.

GUI Any modern system discussion can not be completed untill unless we discuss about graphical interface. Linux typically provides
KDE and Gnome, but there are many alternatives such as LXDE, Xfce,
Unity, Mate, twm, ect. where as Unix most distributions now ship with
Gnome (initial GUI used to be called CDE i.e. Common Desktop
Environment).

Sequence of scripts sourced upon login

How do I make a Theme from scratch for Unity?

Nemo/Nautilus – Where does the list of 'other applications' reside?