In the Synaptic Package Manager there is a category “Installed (local or obsolete)”. For whatever reason I have a bunch of packages listed there. 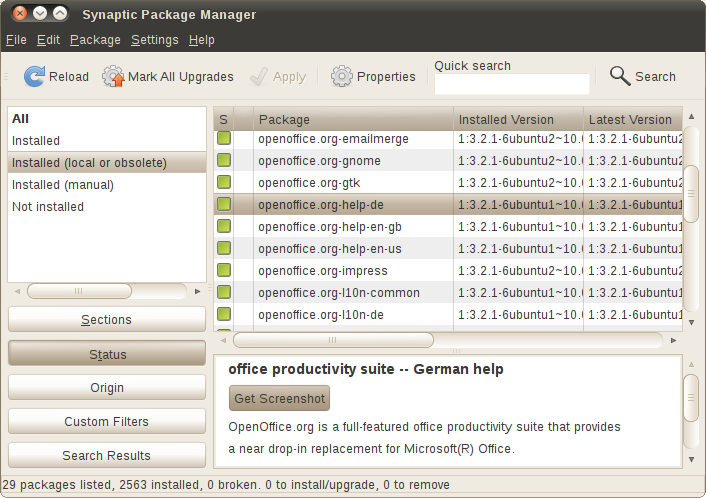 As you can see from the screenshot, the packages are Open Office packages. I doubt that Open Office became obsolete, or local (whatever that means).

A package is listed under “local or obsolete” if synaptic is not able to determine a repository from which the package was (most likely) installed from.

There are three situation which can cause an installed package to be not found in any repository:

These packages were either installed manually (local) or the repository from which it was installed doesn’t exist now/doesn’t contain the packages anymore (obsolete).

From the synaptic help page:

Obsolete or locally installed –
Display only packages that are not
(for longer) included in one of the
specified repositories.

I would add to @nickguletskii nice answer that it is difficult (but not impossible, of course) to obtain the same information on command line using apt-cache and dpkg.

Conversely it is extremely simple with aptitude

It is a pity that aptitude is not installed by default anymore.

How to back up my entire system?