Android Studio 0.4.2 was working fine and today I opened it and almost everything was red and the auto-completion had stopped working. I look at the imports and AS seems to be telling me it can’t find android.support.v4 all of a sudden (offering me the option to remove the unused imports). (android.support.v7 seems to be fine though).

Things I have tried:

Here it is in case it’s relevant:

When I hit “Sync with Gradle” and open “Project Settings” I get a red error telling me I have duplicate library references and to remove the unused ones.. 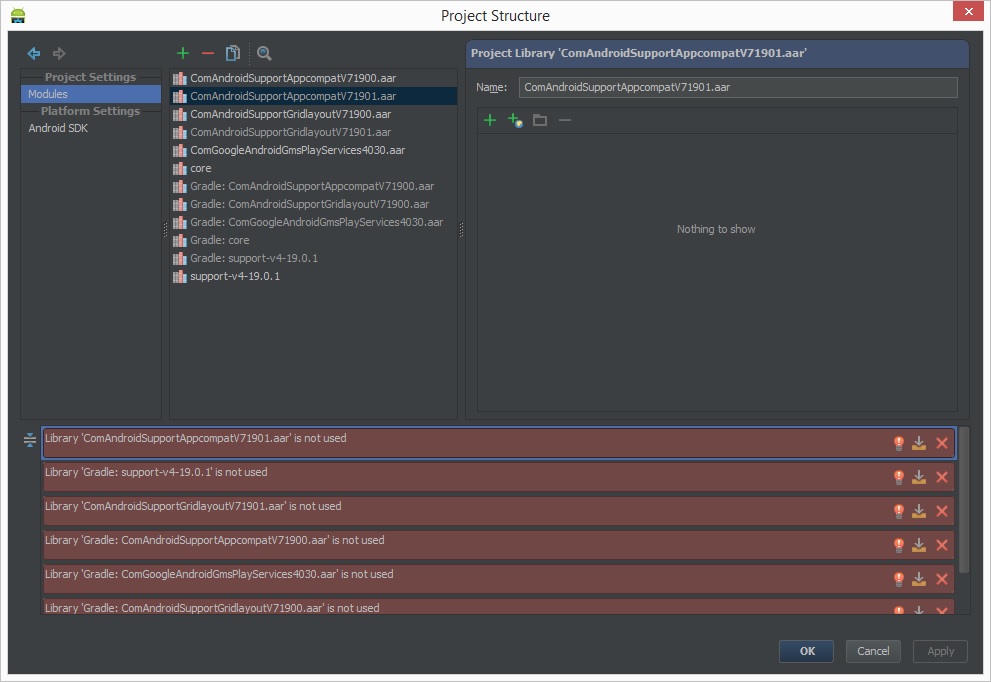 My project compiles and runs fine but I really need the autocomplete working!! Does anyone have any suggestions? 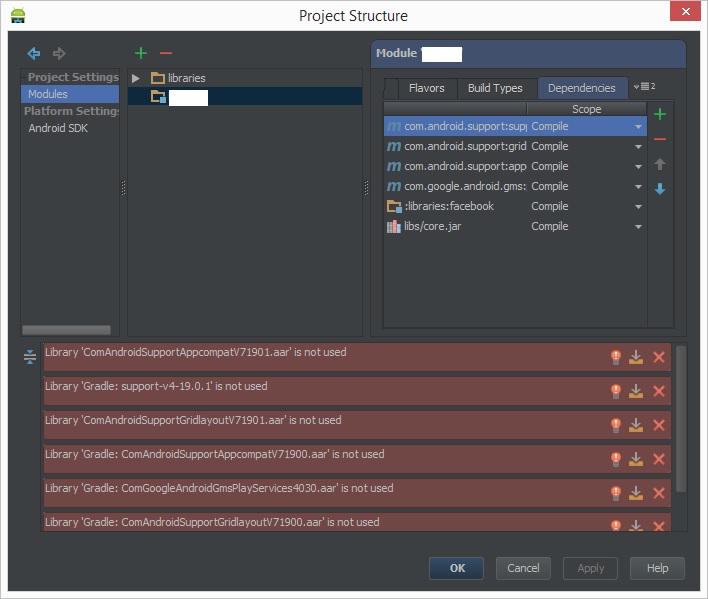 None of the things mentioned earlier here did actually work for me. But then I found this menu entry in the file menu Invalidate Caches/Restart which appears to have fixed the problem.

I don’t really know what happened in the background but when Android Studio started up again the status bar said Indexing... for a minute or so which apparently did wonders.

You’ve already gone down the list of most things that would be helpful, but you could try:

By the way, the error messages you see in the Project Structure dialog are bogus for the most part.

Android Studio 0.4.3 is available in the canary update channel, and should hopefully solve most of these issues. There may be some lingering problems; if you see them in 0.4.3, let us know, and try to give us a reliable set of steps to reproduce so we can ensure we’ve taken care of all code paths.

Go through the link and it worked for me.

1.) Choose File option from menu on left top side of android studio.

2.) Select the option : “Invalidate Cache/ Restart..” It will open an dialog.

3.) Click on the first button with option : “Invalidate and Restart”

4.) It will close the studio and restart it. Start indexing of the project.

It resolved my problem:

I did nothing else and it worked for me.

For me it was a “progaurd” build entry in my build.gradle. I removed the entire build section, then did a re-sync and problem solved.

I’m using Android Studio 3.1.4 and I was experiencing such issue when moving from my develop branch with a lower api target to another branch with target api Oreo. I tried the first solution which worked but it is quite tricky, while the second solution did not solve the problem.

My Solution
When the problem popped back again I have tried to modify slightly my app gradle file enough to AS to ask me to sync files, and that did the trick. Then I deleted the change.

There is a far easier solution built into Android Studio, and it usually works for me without needing any brute force solution mentioned in other answers – so you should try this first:

click on the “gradle” symbol on the right side of Android Studio, and then on the “Refresh all Gradle projects” tool.

Thought i’d throw this out there too:

the thing that worked for me was changing my build variant back to a variant that was working previously. For some reason i had changed this before (and i forgot why).

either way, the best thing to do is to try to remember what you changed that day (it could be something as minor as cleaning, or going back to a previous git commit)…etc.

it also helps to try to resync gradle and force a rebuild.

Struggled with the same problem for a couple hours this morning. Building my project from command line seems to have done the trick for me.

To check if it worked, look in your projects exploded-bundles folder, inspect a library and find the classes.jar. If it is expandable, then everything is going to be ok.

edit – I found after doing a clean within Android studio, it broke again. So if you have to clean, you will need to do this process again.

None of these methods helped me in Android Studio 0.5.8.

My solution was to delete ~/.AndroidStudioPreview directory (in Ubuntu). Sorry, I have no idea where is it in other OS. This directory stores temporary files and Android Studio settings, so I missed all my settings. But it works!

Another way is to download JDK 1.7 and change the path from Android Studio in the error message..and choose Home folder who is contained in Jdk 1.7 folder

Got the same problem today. Fixed it by changing the jdk location in the project structure from \java\jdk1.7.0_05 to \java\jdk1.7.0_25 (which I didn´t know existed until now).

I tried cleaning the project and then invalidating the cache, neither of which worked. What worked for me was to comment out all my dependencies in build.gradle (app), then sync, then uncomment the dependencies again, then sync again. Bob’s your uncle.

I faced similar problem but I followed following steps in my case :-

1).inside project under .idea folder open modules.xml.
2).check if there are two entries for same iml file.
3).delete one of duplicate entry and close android studio or build gradle file again.

In my case it worked.
Hope it helps

I got it solved by setting JDK. I got a pop up saying that Setup JDK when I placed mouse over the error.

I had the same problem, none of the solutions listed here worked. The problem was my source files where not inside the right folder.

The directory structure MUST be :

I have finally figured out what causes this issue.

Actually, you should avoid pushing .idea/libraries folder to your repository. It creates weird stuff in Android Studio which tends to remove all downloaded libraries.

If you have commit history, just recreate all missing library files and avoid them to be committed again. Otherwise, just remove whole .idea folder and reimport it into AS.

try to change your build.gradle with these value:

I tried everything listed here.
Then I checked my androidmanifest.xml
I’d had some stoopid mismatched due to folder renames & package renames.

Solution: make sure
1. version of common libraries is same among modules.
2. each of modules compiles without any errors (try to build each of them from CLI).

Be aware that the name of files and specially folders can result in this error. For instance, if you have a folder “Helpers” and the package for files in this folder is “com.whatever.helpers” it won’t result in any compilation error but will cause the Android studio fail to load the symbols in that folder.
One typical reason for that is when you name a folder with first capital letter, commit it on Git and later change the folder name to all lower case. The Git system won’t recognize the change resulting in a discrepancy between the local and remote repositories that only the new repository clones will be affect by.

Another very subtle cause:

Multi-flavor library should be compiled in specific way than a normal single-flavored. Otherwise it silently produces cannot resolve symbols error.

I had a much stranger solution. In case anyone runs into this, it’s worth double checking your gradle file. It turns out that as I was cloning this git and gradle was runnning, it deleted one line from my build.gradle (app) file.

Obviously the problem here was to just add it back and re-sync with gradle.

I had a similar problem when I rebuilt an aar file and replaced the older one in my project with the new one. I went through all the solutions here and none solved my issue. I later realised that minifyEnabled had been set to true in the library project which effectively removed a lot of dead code that was not being used in the library project.

My solution was to set minifyEnabled to false in the library project, assemble the aar, copied it into my project, invalidated caches and synced the grade project and everything worked fine.

I use shared preferences, but Android Studio complained about Editor symbol. Then, I added

and symbol is cool now.

Please check if you have a project path which has special characters like ! (exclamation mark).

In a similar problem that I experienced, this was the root cause – since many Java applications seem not to tolerate such special characters (For e.g. doing a ‘gradlew clean’ from the terminal would fail and throw a RunTimeException.).
None of the other solutions posted online had helped me. But, once I had removed the ! from the path and did a clean build, Android Studio magically worked.

Why does AndroidTestCase.getContext().getApplicationContext() return null?

How to insert a new line in strings in Android